I do wake up from time to time in the night and keeping the curtains open do check out the sky without having to getting up. Last night when I awoke, the sky seemed cloudy as it was a couple of hours previously but then I noticed a star................out of bed like a shot......just a chance.....and it paid off. maf
Top

What's the best time to view the comet, and whereabouts is it in the sky now?
Top

The comet is currently visible roughly in the south around two or three in the morning although obiously a couple of hours either way when further to east or west....currently in the same binocular fov as Spica. The following may help too as it will give some idea what to expect to see. As time progresses, it will rise earlier and earlier - which will enable more people to see it (i e those who do not easily rise in the early hours) - and will be go close to Saturn and then Regulus.
OBSERVATION SIX: 17th February 2009. Clear sky at 0155 but bands of cirrus appeared within half-a-hour. Comet was obvious in 15 x 70 and 8 x 42, and visible in 6.5 x 21 too. It was round but with much less surface brightness than the Hercules Globular Cluster (M13) and larger than this and easily located above Spica. While observing it, a meteor dashed across the upper part of the fov; at 0210, from upper east to lower west. maf
Top

Thanks for that, Mike. If the sky is clear again tonight I'll be out there with my binocs.
Top

Dreary, slate-grey, skies here in the north-west and set to stay for days to come, so no chance to see the comet.

Same here in Wales. It's been warm and cloudy here for the last three days. It got really sunny this afternoon and I was hoping the clouds would disappear but they haven't.

OBSERVATION SEVEN: 20-Feb.09: 0005hrs: Clear but somewhat murky low in the south, but the comet was easily visible down to the right of gamma virginis (Porrima), more distinct than M67, using 8 x 42 monocular. It was also seen in 15 x 70, like a fuzzy ball with rather indistinct edges, like an unresolved globular cluster. It was seen again at 0510, from an upstairs, west facing window, using 8 x 42, making a very flat, almost isosceles, triangle with gamma and eta Virginis. maf.

NB I feel a bit mean keep posting this observations while everyone else is struggling with the weather but I hope they at least keep you abreast of its observability for when you get a chance. If they are starting to annoy please post "enough". maf
Top

A break in the cloudy skies presented a brief opportunity to observe Comet Lulin shortly after midnight on the 20th Feb.

The best available viewing position from my location leaves me with a lot of local light pollution to deal with. Combined with some low lying mist that was beginning to form, it wasn't the ideal conditions under which to observe. However, I'm glad I made the effort, as the clouds rolled in shortly afterwards.

At the time of the observation Lulin was approximately 30 degrees above the south east horizon. I used a 66mm refractor, combined with a 38mm 2" eyepiece, which gave me a magnification of 10x and an approximate field of view of 6 degrees. The Comet was visible as a small circular diffuse patch of light, in the field of view, but much more obvious than on my previous observation. I imagine it must look quite impressive from a dark sky site. Still fascinating to be able to see it though.

I've attempted to sketch what I saw at the eyepiece. 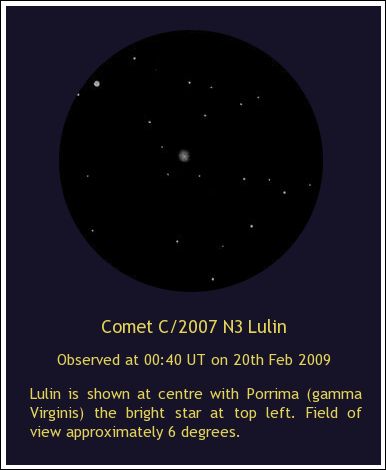 Hi,
Nice report and sketch Jeff.
Seen quite a few comets in the past but this one is avaiding me due to clouds.
It is cloudy at night and clear all day, as I type this at 07.59 there isn't hardly a cloud in sight. So frusrating but will keep up the chase.
ATB
Dave
Meade LX 200 (7"). Odyssey 8" Dob.
11X80 10x50 15x70 bins
Celestron Neximage ccd cam
Top

Went out last night at 11pm and spotted the comet in small binoculars. I spent about 1 hour setting up the scope for some astrophotography and by the time I'd finished the clouds had rolled in. I waiting until 1am and they hadn't cleared so I dismantled the gear and brought it back inside. By 1:30 the sky had cleared again...

I am pleased to hear that others are begining to to see this visitor to the Solar System. At the meeting of the Foredown Tower Astronomers last night discovered that I was the only one there who had seen it. maf
Top

I managed to catch it last night too. It was the first time in a long time there was a break in the cloud. There was a meteor flashing through the sky as I set up. Eventually got my 'scope on it after a few views of Saturn, very obvious with a lovely big coma (the comet, not Saturn...). Unfortunately, the clouds rolled back in before I could set up any imaging.
Top

KendalAstronomer wrote:...There was a meteor flashing through the sky as I set up...

I saw a meteor whilst looking at the comet too.

Mine was heading southeast, just to the right (west) of the comet... maybe passing through Leo. Heard lots of owls hooting too. It was great to be observing again - the last time I had the scope out was for the partial solar eclipse last August!
Paul.

Dear al(l)
My first attempt to see Comet Lulin last night.
Early evening was cloudy here but 22:30 UT looked out and it was clear. The weather forecast I looked at had suggested it would be cloudy all night, so I was reluctant to set up at telescope. Being still clear approaching midnight I started searching for the comet with 15 x 70 binoculars. Sky transparency was pretty mediocre but initially Spica was obvious enough but instead of getting better as it headed for the meridian disappeared in the murk. By then cloud was burying spica and I abandoned ship at 01:15UT. when I got up at 08:15 UT it was quite foggy.
A locally based astronomy friend and SPA member who had previously observed the comet twice previously had much the same experience as me last night.
Best of luck to everyone and well done to those who have already managed to see the comet from Cliff
Top
Post Reply
132 posts