by jeff.stevens
I've seen a few pictures on the SpaceWeather website regarding NLC activity recently, but nothing much from the UK. I've been keeping an eye on the night sky at various times recently, but haven't seen anything resembling NLC.

However, I was looking out at about 3:25am on Sunday, and I spotted what looked to me to be one or two NLC like tendrils low on the northern to north-northeast horizon. I wasn't entirely convinced this was noctilucent cloud, and certainly not as clear and obvious as last year's fantastic display. So, I thought I'd post the image on here to get the opinion of others with more experience of viewing these, and to see whether anyone else spotted anything similar last night. Click anywhere on the image to see the higher resolution version. 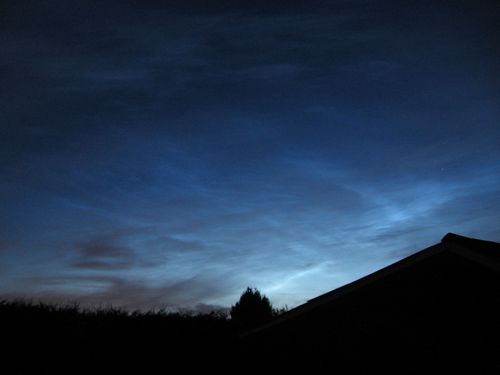 Jeff.
by @@
hey jeff, im no expert but they look good to me

by jeff.stevens
Thanks for your reply. I looked at the sky again, from an upstairs window, about 10 minutes after finishing photographing them, and if anything they were slightly more defined and vivid.

Jeff.
by Cliff
Dear Jeff
I haven't seen any this year yet (and from what I recall I saw non last year) but your pic certaily looks noctilucent-ish to me.
Best wishes from Cliff
PS If you'd said it was definitely Noctilucent I wouldn't have questioned it myself.
by jeff.stevens
Thanks for your reply, Cliff. Since posting this I've come across a couple of reports of NLC activity around that time. Looking at the photo again, there seems to be a slight haze over the sky, dulling the effect slightly, which is perhaps what caused my initial doubt.

Let's hope the skies stay clear and we're all treated to a vivid display of NLC this evening.

Jeff.
by @@
towards the end of last month i had a good try to find mcnaught, to no avail i add, but did see a few nocs. to be fair the ones in your photo are as good as any iv seen
by mike a feist
Despite lots of practical observing, matched with various studies of optical phenomena, clouds and even a couple of aurorae, I have never seen Noctilucent Clouds. Whether this is especially due to my South Coast latitude, maybe made worse by my poor northern horizon from the house - requiring the positive action of 'going to the local park' to see something known to be there. maf
by Alastair McBeath
Jeff: Your photo shows definite NLC. By most standards, that's a very impressive shot!

Mike: Your south coast of England latitude is favourable for NLC observing; they've been seen to below 40° latitude in recent years. You do need good, low northern horizons though - ideally from WNW through north to ENE at least - and to know what and when to look for them.

Here in NE England, I've seen eight displays this year so far, six in June and two this month, most recently on July 4-5. July 3-4 wasn't clear unfortunately, so I missed your display Jeff. However, all that I've seen has been very weak and low to very low, needing binoculars to confirm mostly.

As ever with NLC, the thing to do is keep a careful, regular check on the northern horizons from soon after sunset onwards, at maybe 20-30 minute intervals, or more often. I find it's best to sweep round with 7x50s, or check any suspected near-horizon glows with binoculars.

We could still get a "spectacular" or two, as the core of the season has a fortnight or so to run. Best of luck!

Alastair McBeath,
Meteor Director, Society for Popular Astronomy.
Meteor homepage: http://www.popastro.com/sections/meteor.htm
E-mail: <meteor@popastro.com> (messages under 150 kB in size only, please)
by Cliff
Dear al(L)
I was previously correct in saying I haven't seen any noctilucent clouds yet from here this year but I think I was wrong in saying I didn't see any last year. Indeed I got some nice images one night.
Another thing about Jeff's recent images as well as the bright high noctilucent clouds a few darker lower level clouds are to be seen.
Best wishes from Cliff
by Gregger
There's cloud outside now, very much like Jeffs photo

by Ian Allsobrook
Some nice NLC seen here on the South Coast July 9th, they started from around 22:30 until 23:45
Check out my Photo's
http://www.flickr.com/photos/ian_allsobrook/
by jeff.stevens
That's a superb display you captured there, Ian, with some wonderful structure and colour.

I saw some fantastic looking NLCs N/NW from Coningsby in Lincs last Friday at around 11pm. Must have been a good weekend for them!
by Paul Sutherland
Interestingly, amateur astronomer John Rowlands, a finalist in a BBC science contest, is predicting a display of NLC tomorrow night (Monday) and for the next few nights based on various factors:
http://skymania.com/wp/2010/07/watch-ou ... louds.html

Can't wait to see what happens.

Paul
by Paul Sutherland
Skies appear to have been generally cloudy over the UK last night, but an observer in Finland is reporting on John Rowland's NLC page on Facebook that he saw a good display of noctilucent cloud, as predicted, and took some photos.
All times are UTC
Page 1 of 2