Had a look at Jupiter last night and saw my best view for a while, despite sky conditions that left a certain amount to be desired. I note that it is on the home run to opposition now, that day being 6th February, so we should be in a good period for observing it.

Quite a bit of belt detail was on offer for my 14" Dob, with a very nice view of the Great Red Spot and the curved white line that separates it from the darker main part of the SEB.

very nice; i love this planet!

For the rest of the time, the planet was pallid and lacking the detail that I am accustomed to. At times, it deteriorated into fuzziness and actually achieving focus on the moons was a bit of a challenge.

Is anyone else having this problem? My `seeing' is being contaminated by some kind of air flow up there. Defocussing the giant planet, I see it racing across the big, bright blob. It has been going on for a good month an a half now, after a very good and stable autumn. To be honest, I have only had three or four nights of decent seeing during this time period.

I had the same problem with Venus Nigel. It's probably the flow of cold Arctic air that's descending over us.
Frosty nights can cause bad seeing.
brian
Top

Yes, thanks...we have had quite a changeable pattern of air flow over the last couple of months, haven't we, with the temperature swinging from cold to warm to cold to warm, etc.
Skywatcher 350P f4.65, Skywatcher StarTravel 102 f5, Adler Optik 9x63 binoculars
Top

I've not got too much viewing time on the big one this year. Mostly due to either the weather, my shameful laziness during those freezing windy evenings or just other commitments!

It may be worth waiting until the planet is near/past the meridian late at night. That way its higher up in the sky. This means less atmosphere to peer through keeping the turbulence to a minimum.

Hi I don't know if this will help I've had some good views of Jupiter and the moon's it was my first light at Christmas with my telescope that I got. I got good views thro December and early January but stared to go fuzzy thourt I'd have 're colilimate my scope but found an app called astronomy panel you set it to your log and latitude but it gives you the humidity cloud cover transparency wind and the weather the moon is full or not and you can get it to notifie you in advance when conditions are good or bad hope this may help in planing to go out with your scopes and its free from play store
Skywatcher 200p explorer EQ5 mount synscan upgrade kit
Nikon D3100
Top

Thanks for this info, Speedy & Vega.....did look again on Saturday night, but it was about the worst I've seen it yet! That said, the planet was rather low, it being only about 8.30 p.m. As you say, Vega, I'll have to seize the opportunity at one or two in the morning, some time.

But of course, now that the full moon is well and truly out of the way, thick cloud has rolled in to stay....sniff...

Did some more observing of the mighty planet, last night, returning to it several times during a two hour session. There was some atmospheric turbulence, but sky clarity was superb, with the E and F stars of the Trapezium clearly visible in the 14" Dob at only 110x and quite a few deep sky objects having unaided eye visibility.

The memory of Jupiter last night is still haunting me this morning. It was very pleasing, with three of its moons visible and the tiny shadow of Io visible midway between the NEB and the SEB, centrally positioned on the planet at around 7 o'clock. The planet was displaying very nice belt detail and beautiful curvature, although conditions limited me to a magnification of 275x - just sufficient for comfortable belt viewing.

All in all, it was a night during which the mesmerising beauty of Jupiter wowed me and is still with me, this morning.
Skywatcher 350P f4.65, Skywatcher StarTravel 102 f5, Adler Optik 9x63 binoculars
Top

To my surprise, more or less a repeat of the previous entry occured last night...seeing superb, with about five thin belts poleward of each equatorial belt, again popping in and out of visibility, but visible for more time than they were invisible, this time. Beautiful.
Skywatcher 350P f4.65, Skywatcher StarTravel 102 f5, Adler Optik 9x63 binoculars
Top

I felt for the first time last night I was getting a good view of Jupiter. Until now, lack of definition seems to have been visited upon me. Certainly, the met conditions has much to do with it but also a gentle clean of my 200P secondary mirror and it not fogging up must have helped: the latter was somewhat strange as it snowed an hour after my observing.

Anyway, I have attached a visual observation made between 1955 - 2020 with x 143 and blue filter. Comments on improving my astro sketching skills welcomed. 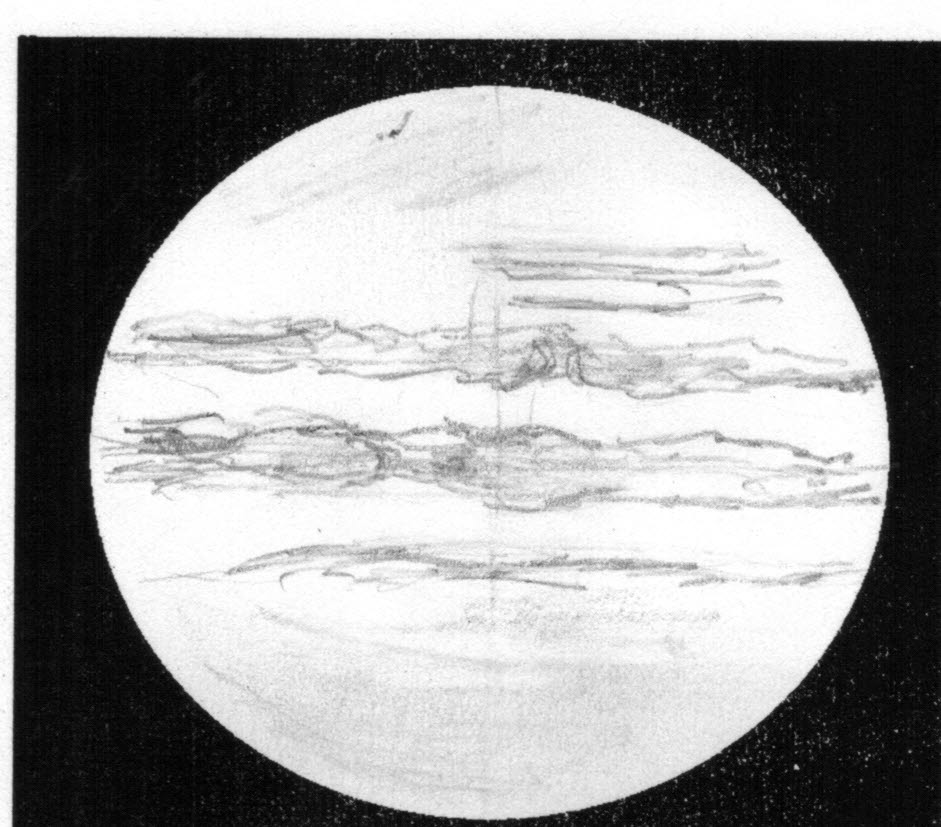 . Thanks for sharing this sketch.

I can't advise on technique, but maybe reduce the size of the disc to half what you have posted. This may improve the look.

It looks like 17th-century sketches, but that is fine.

Last night at 2356 UTC the moon was about 6.5° below Jupiter. It was cloudy and the moon had a halo, so the two of them looked quite nice together.

Many thanks David for the idea.

Actually, the original was drawn on the standard SPA Observers' form and was actually half the size of the image here. The scanning and cropping seems to have enlarged it and not for the better.

I will try and find a setting that keeps its original size.

We didn't seem to have a halo round either object last night yet we had cloud from time to time and a brisk wind.

Hi, cdgtaylor...I think that what you need to do is to open the image in a programme like Microsoft Paint and then reduce the number of pixels in the image (in Paint, select `Image' on the top toolbar, then Stretch/Skew on the dropdown menu, and then reduce the horizontal and vertical percentages, probably to about 80% in this case....and finally `save' the image, of course!).

Nice drawing, by the way!

Many thanks for your help in reducing the image size; I will certainly try it.

I was also thinking of 'post-processing my drawings in future to add the background colours to the bands. I am not a great favourite of coloured pencils although watercolour pencils are a possibility.

However, with pencil lines outlining the cloud features only, these areas latterly could be coloured using either Paint or my elderly Photoshop software. This would give a greater tone consistency to featureless areas than from lead pencil shading. Could also try a softer pencil on these areas as well - I suppose!

Thanks again for your advice - Graham
Top

In the mean time, I am also looking forward to Sunday evening, when the BBC assures me that there will be clear sky. Time to get in some deep sky observing and then change to Jupiter as the 9.20 moon rises and lightens things.

I hope the drawing goes well.