Jupiter, The Waning Moon and Mars

Jupiter, The Waning Moon and Mars

I had an early start today and stepped outside into some very crisp air (-1.5 degrees Celsius) before 6:00am, and was greeted by the sight of bright Jupiter and a crystal clear view of the Moon approaching last quarter. Mars was visible too, with a noticeable orange colouration, to my unaided eye. I forgot to try and spot Saturn. but I suspect it may have just been out of view. There was a lot of low lying mist across the fields, which really added to the scene. Very atmospheric.

It was another of those glorious mornings of being able to watch the sun rise on my journey into work. I stopped to take a few photos. At one point it appeared that a sun pillar was forming. The attached photo doesn't quite show what I was able to see with the unaided eye, but there was a very faint column of light extending upwards from the sun. It dissipated after about 10 minutes, and never really formed to the point of other sun pillars I have seen. All in all an uplifting start to the day.

Have a good weekend. 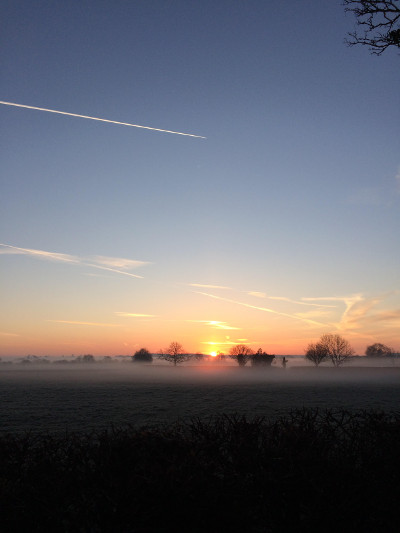