Uranus in a small telescope

Uranus in a small telescope

I tried posting this a few days back but the colour tints in my eyepiece sketch failed to show in the posted image; here are the notes without images.
I’ve already posted a brightness estimate made with 15x63 binocs for the planet on Jeff Stevens’Uranus thread. On Nov 10 2020 my estimate was vmag 5.7. I followed this up on November 13th, with some colour comparisons of the planet with a nearby red giant star (19 Arietis) of about the same apparent magnitude. For the colour comparison I used an 80mm Skywatcher Startravel (focal length 400mm/F5), piggy-backed on my 90mm refractor, with 3 inches of focal extension tubing and a 40mm plossl eyepiece, giving a nice wide field of about 4 degrees at x10. In practice this arrangement vignettes the objective to about 70mm aperture but the straight-through, inverted telescopic image has the advantage that it makes an excellent finder scope (using the Startravel thus with diagonals can be inconvenient). Finding 19 Arietis and Uranus this way was quick and simple. I was able to use powers of x10 and x16 to bring star and planet alternately to the centre of the field. Colour observations were made between 2140 and 2155 UT in variable transparency due to passing cloud. Seeing conditions were not intrusive at the lower powers used. Uranus showed a light blue colour compared with the very delicate red/orange hue of 19 Arietis that actually seemed more distinct to my eye than the tint of Uranus. These shades are very difficult to render accurately in a sketch because they are so faint. I think they were best seen when both star and planet were defocussed slightly at x16.
From 2155 to 2210 UT I switched to the 90mm refractor to see if Uranus could be made out as a disc. Seeing was about Ant III and observations were made between cloud and hazy spells. My 90mm Skywatcher achromatic (focal length 910mm/f10.1) has a convenient 60mm diameter central aperture that uncaps so that it can double as a 60mm f15 scope. Starting at 60mm with x83 the definition was good but I cannot honestly say that I saw a planetary disc. At x165 (11mm TV plossl and x2 TV barlow) with 60mm the image was too dim. At 90mm aperture with x83 I am fairly sure there was a visible disc, but not entirely. If I did not know I was looking at Uranus, would I have recognised a planetary disc there? No, I doubt it. At x165 with 90mm the steely disc was definite. 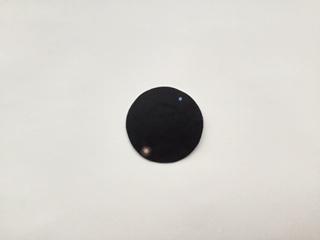 A composite sketch. !9 Arietis lower left, defocussed at x16 in 80mm f5 refractor. Uranus upper right at x165 in 90mm refractor. The orange tint of the star and the pale blue of Uranus might just show in the image. The star and planet are shown in their approximate positions in a 3.5 degree inverted field, south up, east right.
I attach a pic of the 90mm refractor with its 80mm farkle* 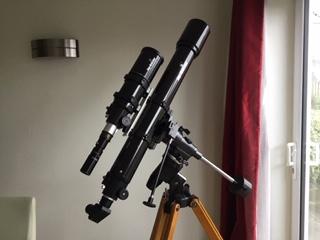 Kind thoughts, Bob
*farkle - a portmanteau of "function" and "sparkle", I think. It means a flashy motorcycle accessory and I gather there are more urban definitions that we need not go into, but why shouldn't we pimp-up our telescopes? So, if a biker says "Show us yer farkles!", it doesn't mean you're gonna get mugged, or worse.
Last edited by RMSteele on Sat Nov 21, 2020 1:56 pm, edited 3 times in total.
Top

Re: Uranus in a small telescope

That's a neat rigg Bob. I haven't seen Uranus for almost sixty years, and then only once. That was through a friend's homemade reflector with bought optics.
Uranus looked greenish, not as we might expect, blue. It was quite low at the time and visible from the centre of town with the unaided eye. Light pollution was minimal then, the nights really were dark in these days.
After Uranus we took a peek at Neptune, it looked blue. As with Uranus, it was the only time I saw this gas giant. My favourite objects for observation are open star clusters.

Re: Uranus in a small telescope

Very interesting, Bob. I like your setup - it looks fairly portable and easy to use. As much as I love observing, I find my enthusiasm for lugging my 8” Dobsonian out of the garage and into the garden wanes quite easily.

I’ve never been successful in rendering colour in a sketch, other than an attempt at Mars. It’s a tricky thing to do. Although, I did have a play around with some digital sketching for a short while, but didn’t find it as satisfying as using a pencil (probably because I wasn’t patient enough, or prepared to put in the practice).

Anyway, lovely to read about another successful observation of this gas giant.