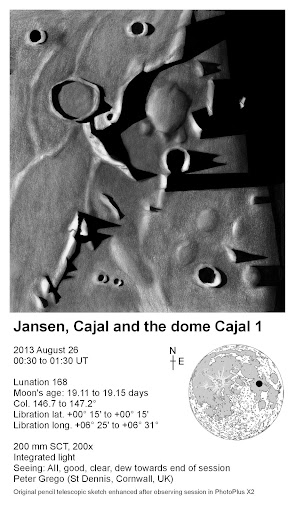 Jansen, Cajal and the dome Cajal 1
2013 August 26
00:30-01:30 UT
Lunation 168
Moon’s age: 19.11 to 19.15 days
Col. 146.7 to 147.2°
Libration lat. +00° 15’ to +00° 15’
Libration long. +06° 25’ to +06° 31’
200 mm SCT, 200x, integrated light
Seeing: AII, good, clear, dew towards end of session
Peter Grego
Location: St Dennis, Cornwall, UK
Original pencil sketch enhanced after observing session in PhotoPlus X2
Notes: An observation of sunset over the fascinating and much-neglected dome field near Jansen (23 km) in northwestern Mare Tranquillitatis. Jansen, slightly polygonal in appearance, was some distance from the terminator; its western rim cast a narrow shadow but most of the crater’s dark, smooth-looking floor was illuminated, and appeared darkest in the upper northeastern corner at the foot of the inner eastern wall. Low ridges extended both north and south of Jansen across the mare, and another ran around Jansen in the west, some distance (around 10 km) from the crater’s rim. To the northeast, near the top of the area depicted, lay the small crater Cajal L, its interior full of shadow. To the northwest of Jansen, in the upper left corner of the area depicted, was a similar-sized but unnamed crater whose floor was shadow-filled. To the east of this crater appeared a dusky patch that wasn’t full shadow, perhaps an area of rough terrain or lower albedo. East of Jansen was the prominent curve of Dorsum Barlow which cast a broad shadow to the east. There appeared to be a trace of Rima Jansen cutting across the dorsum but it was not observed across the mare itself. Running south of Jansen was a more prominent mountain spine that extended southeast by around 35 km. The dorsum and ridge formed what looked like the western wall of a large but disintegrated irregular crater east of Jansen whose floor was occupied by a large dome, roughly the size of Jansen, with three smaller domes appended to its southern edge. This striking feature was the dome Cajal 1 (it used to be called Jansen F 1, and Jansen F was renamed Cajal in 1973). Cajal 1 appeared rather smooth and rounded, slightly polygonal in outline and darkly shadowed on its eastern slopes in the setting Sun; there appeared to be some structure to it , with a slight depression running across its northern slopes. Three elongated ridges or elevations lay to the east of Cajal 1, the nearest and brightest running southeast from the 4 o’clock position on the dome’s base, a north-south ridge further east adjoining the terminator and the third to the north of this ridge, around 15 km from the dome’s base; the latter ridge cast a shadow that nearly touched the terminator. The crater Cajal (9 km) itself, which lay south of the dome Cajal 1, had a floor completely covered by shadow but its inner eastern wall was bright. Cajal cast a prominent shadow to its east which didn’t quite reach the terminator. Immediately to the southwest of Cajal was a small peak that cast a long, broad shadow to the terminator. The southern half of the observational drawing takes in the eastern wall of the large unnamed flooded crater east of Carrel (Carrel lay just outside the area drawn, to the lower left), a prominent ridge whose northern tip was connected with the previously-mentioned mountain spine to the southeast of Jansen by a low north-south ridge. Low dorsa occupy the central southern portion of the area depicted, including the little craters Jansen W and its smaller partner. Four low domes were observed in the vicinity of Sinas E, along with a peak to the crater’s northeast that cast a pointed shadow towards the terminator. It’s worth mentioning that the terminator here appeared rather linear and seemed to lie along the shadow cast by a low ridge (although perhaps this is not depicted clearly in the sketch). Additionally, the placement of Sinas E in the drawing is a little further north than it actually is. The observation, a 10 x 12 cm pencil sketch made at the eyepiece, was immediately scanned and transformed into the finished drawing in PhotoPlus X2 by darkening and defining the shadows more clearly and removing any obvious errors in the original sketch that could not be attended to in the field.
Top
Post Reply
1 post • Page 1 of 1