Mars Opposition in a 90mm Refractor

Mars Opposition in a 90mm Refractor

Hello, I did a strip sketch of Mars last night in a spare hour or so while the wife was watching "Strictly" on the telly. I used only my own sketches from 27 September to 21 November 2020, so it doesn't pretend to be an accurate chart. I simply constructed it as an extended drawing from my sketches by eye estimate, using mark 1 eyeballs and the common sense app in my brain to "straighten out" the spherically projected features on my sketches into a flat drawing. It appears north at top and left/right reversed as observed in the refractor with a diagonal. Northern hemisphere features don't show up prominently because the southern pole was tilted in our direction during the time I made my observations. Regards Bob 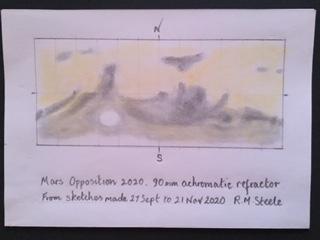 This is a super piece of work, Bob. I think I’d have this mounted and popped on my wall if I’d produced it.

I’m equally impressed that you’ve been able to flatten out from a series of sketches. Well done indeed!

All of this detail with a 90mm too. Thanks for posting it here.

That is impressive Bob. I envy your ability with pencil and paper

Brian, Jeff, Brian, Thank you for your comments.

I constructed it by drawing grid 50mm tall and divided into 12 vertical sections 10mm wide, with a central “equator” line - the same scale as the eyepiece sketches where, for example the width of the Syrtis Major at the centre of the sketch done on 27/9 is 10mm. Each vertical section represents 30 degrees of longitude. There are 6 eyepiece sketches, each showing a region centred about 60 degrees from the next one in the series. It was fairly straightforward to start by putting the S. Meridiani on the centre point of the grid. That kind of shifts the markings south a bit from the actual view in my sketches, but at roughly 60 degree intervals I sketched in the features from the central 60 percent of each sketch pretty much as they appeared. I drew in the intervening features othographically by comparing the adjacent eyepiece sketches and thus linking it all up. I don’t want to call it a map, because my method can’t be that topographically accurate. It’s an extended sketch really. A couple of things don't show up on the image: a bright streak crossing Chryse (east-west) and a strongly suspected whitish spot north of Mare Sirenum. I could tinker with it for hours, but I don’t. It is what it is, a bit of fun for a change!

But, you know, the first reasonable, systematically constructed map of Mars was made using a 95mm refractor (Beer and Madler 1840) and it was quite comprehensive, even showing polar projections.
Kind thoughts, Bob
Top
Post Reply
5 posts • Page 1 of 1