I'm trying to get an idea of how much media interest the upcoming Total Solar Eclipse(Partial in the UK) is likely to get in the coming weeks. Has anyone here heard of any local events happening on 20th March in line with the eclipse? Is anyone here organising an event? Outside of the astronomy field and apart from BBC Stargazing live and one mention in our local news, its seems to be showing a slow start in publicity so far.

I know as with all these celestial events there seems to be a heavy spike in media interest much nearer the time. It would be interesting to get an idea though. I for one am excited come rain or shine as my last solar eclipse experience was back on a cloudy morning in August 1999 !

You must have missed the Jan 2011 partial eclipse 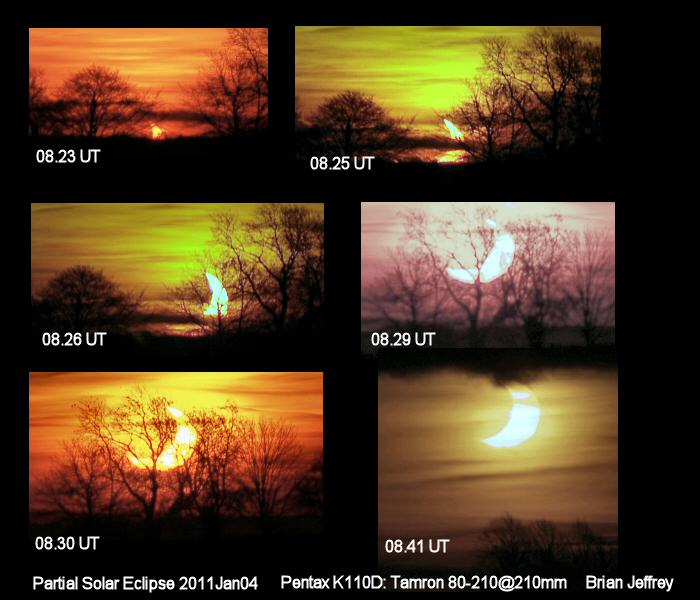 Would have loved to have seen that sunrise, but the weather prevented a view!

If any eclipses really suffer from clouds these are the Lunar ones, many many having been completely lost to the weather!!!! regards maf
Top

Has anyone else noticed the fall in temperature during some of the partial eclipses - depending on the amount of obscuration by the moon?
brian
Top

During the 1999 almost total seen in entirety here in Sussex - a wonderful event it was too - at maximum the light was really weird but I cannot recall whether there was a chill in the air or not. We were very busy with the media and visitors to the Tower. I remember Venus shining down near the Sun and a reporter asking me how I knew it was Venus.....my personal record is limited to a sketch made from the camera obscura early on. Fifteen years have passed since then...how time slips by! regards maf
Top

Lovely shots Brian. I must have been clouded out for that one because I've always wanted to get a sunrise eclipse shot! The sun gets a wriggle on climbing up too early for that kind of shot next month

. Worth the trade off for an 85% eclipse tho

Well, I was lucky to get those few images. At Sunrise, the sky was 99% obscured with heavy dark cloud. Just a thin band of clearer sky low over the SE horizon. I was able to image the sunrise for about 20 minutes, then the partially-eclipsed Sun ascended into the dark murk at 8.41 and was not seen again that day

I still have two solar viewers (dark strips of plastic to safely observe the Sun through) that were given to us by the hotel where we were staying for the 1999 August 11 eclipse. Sadly, I never got to see the totally eclipsed Sun in the sky (due to cloud), but being completely immersed in the Moon's umbral shadow was still a very memorable and atmospheric experience. Hopefully, I will be able to put the solar viewers to use on March 20!

My subsequent aim is to see the total solar eclipse of 2017 August 21 in the USA.
Top

We should take care with the kinds of filtering we use for solar observing. A No.14 welder's glass is safe, or a tilted No. 13, for hand-held viewing.
These are available at engineers suppliers.
brian
Top

The two filters I have are CE Stanford Solar Viewers, with an optical density of 5.5.
Top
Post Reply
13 posts • Page 1 of 1