Dear al(L)
the following is based on an article (Spot of Bother) in 'New Scientist' 14th Sep magazine by Brian Owens.
Owens starts mentioning the contribution by 90 astronomers continuing a ritual begun in Galileo's time.
(Important to me but not mentioned by Owen - Early 19th century Heinrich Schwabe discovered the 11 year sunspot cycle). Soon after that Rudolph Wolf(Zurich) observed sunspots regularly and coalated other astronomers sunspot counts back to 1700.Prior to that records seemed unreliable but later Maunder realised there had been a period of few sunspots - the so-called Maunder Minimum.
Wolf calibrated observations to compensate for individual observers differences (eg eyesight and different sized telescopes).
Zurich Observatory closed in 1981 and Royal Observatory of Belgium took over the sunspot work. Since 1951 US National Oceanic & atmospheric Administration (NOAA - Boulder Colorado compiled another series of counts broadly agreeing with Belgium. But in the 1980s
Douglas Hoyt (Research & Data Systems -Maryland) realised Wm Herschel recorded sunspots when Wolf's records were blank. Subsequently Hoyt and Ken Shatten (NASA) researched old archives finding 100,000 observations not used by Wolf.
The new series of counts based on 'sunspot groups' ended in 1995 turning up surprise not agreeing with the other series. In some periods before 1885 the the new group spot number was lower than Wolf by 50% and between 1945 and 1995 Wlf numbers were also higher than the @group' method.
However, it was also found that in the 1940s Max Waldmeirer at Zurich changed sunspot counting when it was realised bigger sunspots represent greater magnetic activity but Waldmeirer informed few others about counting changes.
Cortesi (Locarno Observatory) did know and used Waldmeierer's re-calibration but others didn't.
Other problems came to light - some Greenwich Obs records 1874 to 1974 were unsatisfactory -particularly the early 20 years. Furthermore Wolf himself doing a lot of travelling 1860 to 93 made sunspot counts using a small portable scope seeing 40% less sunspots than using the Zurich scope. Wolf calibrated for that but initially Hoyt & Shatten were confuse about it. More recalibrating then being necessary.
Apparently there is to be a meeting May 2014 to finalise the sunspot count problems .
Best wishes from Cliff
PS I've provided a graph to help show the problem with sunspot counts - I hope it is of help. 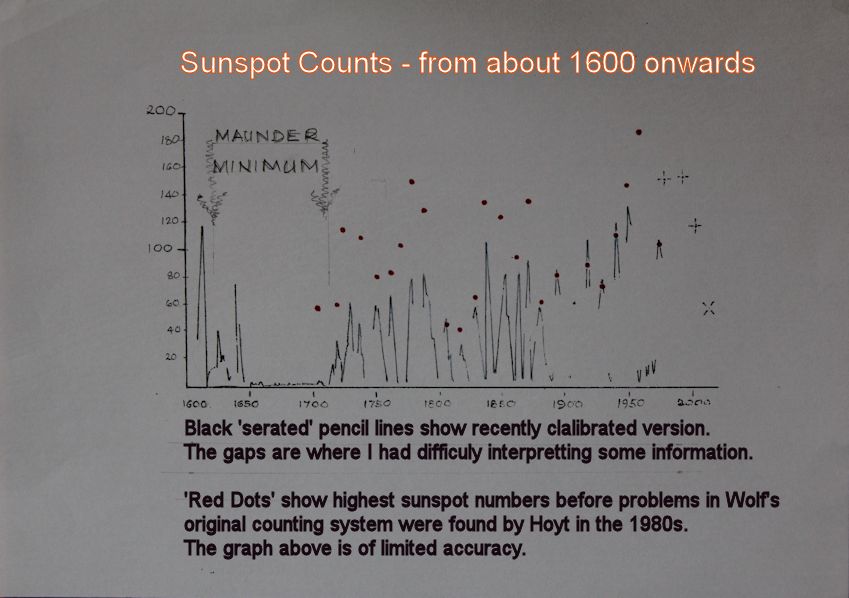