PART 1
Almost back to my normal grumpy self after 3 weeks 0f down under flu ( I blame Bob for stirring up them southern double stars !).
At first glance through the window the day seemed to be starting perfectly. Closer examination revealed thin cirrus but worse still droves of contrails in the sky, which I then photographed. Still not a bad day, my wife & I felt fit enough to drive onto the Pennines via the M62 , not the globular cluster in Ophiuchus - the SMART motorway usually cluttered with countless environmentally unfriendly motor-cars like our own - examples of an over-populated England.
We stopped briefly to photograph more contrails above "Indian's Head". Eventually reachingthe scenic car park near Holme Moss TV transmitter mast. The view was pleasant enough though marred by haze with an obvious pall over the distant vale of York.
We even got home in time for me to observe & image my only star now (the SUN),
Two images now attached :-
Manchester contrails. Indian Head contrails.
from Cliff 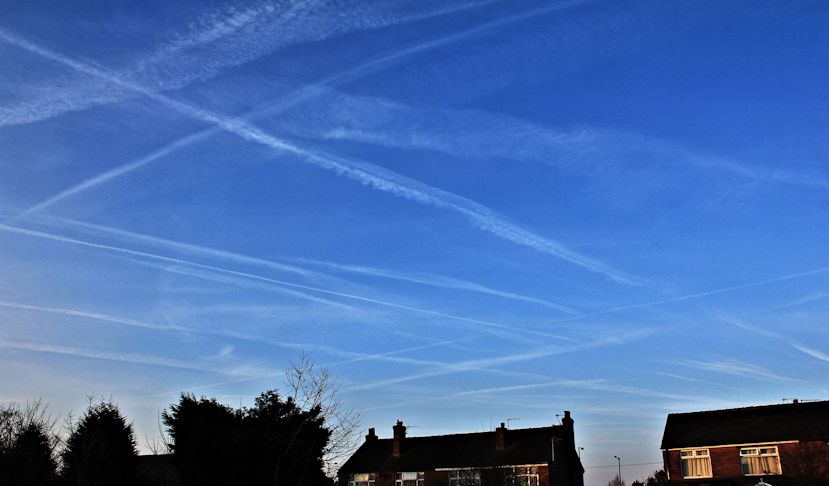 Nice picture Cliff. Too many cars and planes, yes, but an overpopulated Britain?
www.bbc.co.uk/news/uk-42554635 .
brian
Top

Brian
Thanks for your comments.
However, sorry to be pedantic but I think you did refer to Britain and the interesting article that you point us to actually refers to the UK - I specifically referred to ENGLAND.
I deliberately did that because if I considered the UK as a whole things might get more complicated.
That said, I personally do think that assessing the problems that England & even the UK as a whole might have on the basis of how much area is concreted over is not a satisfactory way to assess an ideal population of any country - England or anywhere.
I'll not rant on for too long just now, but I will mention one of my pet simplistic thoughts I've held for many years now. Push come to shove I'll say my ideal UK population would be 35 million people.
Best wishes from Cliff
Top

Hi Cliff,
Some of those contrails may be from the trans Atlantic entry points, so not necessarily planes coming from Britain.

There are 2 or 3 thousand transatlantic flights a day, all using the U.K. airspace and going on great circle routes.
I can't remember if the entry points are spaced every 1 degree or 0.5 degree in latitude.
Many cause aircraft to pass over Manchester.
Aircraft fly at 29,000ft to 41,000ft. The private business jets can get higher but usually 41,000ft although their ceiling is sometimes 51,000ft.
Most civilian aircraft use 41,000ft as a maximum altitude.

I think that we can only feed 25 million people without food imports, so 35 million may be too many.

With ever-increasing numbers of aircraft, scientists are predicting a permanent stratospheric smog. This combined with the vast increase in light pollution on the ground could sound the death-knell for sky-watching.
brian
Top

You really need to watch this

For info, I am Autistic, Aspergers, ADHD, therefore if I come over as a little "short" on occasions it is not intended, thank you
Top

Brian
Thanks for your additional comments. Yes, the airline industry does seem to get away with messing up the environment and never being brought to account.
best wishes from Cliff
Top

Skyhawk
The "film" you pointed us too probably sums things up.
I have to admit my self centred concerns (being only related to the UK) don't even scratch the surface of what the world's problems really are.
I can only say whether humans save themselves or not - the earth will survive, well probably.
Best wishes from Cliff
Top

Rest assured Cliff that, come what may, humanity will survive and on a higher level

BrianL
In response to comments you posted in my mixed up "Apology" topic post earlier.
I have to say that whatever I say is unlikely to have much real affect in actual practice.
To put it crudely I think the human World is likely to go into decline (assuming it isn't declining already). In saying that I don't necessarily mean our human population will necessarily start falling immediately, or that the World's human population will necessarily fall (although I don't think it can increase upwards forever !) - but I think human standards will go down (a bit like pop-music and supposed art is already). In saying that I must admit I don't think my assessment of human standards would be acceptable to everyone (even only all humans and of course other living earthly creatures might have their own different values).
I have to admit that my own current assessment is very narrow minded.
Arguably "globalisation" is now increasing. Although I personally do not think the way things are heading the human population is necessarily for the better. I think globalisation is being driven & manipulated by some (possibly few in number) human Clever Devils. That few are likely doing very nicely and may even increase in number, but very few compared with the human global population as a whole.
So perhaps only because of my concerns about globalisation, I'll suggest that the UK being able to feed itself would be a good way of ensuring the UK's continuous survival.
Although I doubt that is ever likely to be a really possible out come.
Put simply - WE'RE DOOMED, ALL DOOMED ! to misquote someone in "Dad's Army".
I don't think us all going to the Moon or Mars is the answer, but I did discover a wonderful exoplanet in my dreams last night.
Best wishes from Cliff
Top
Post Reply
10 posts • Page 1 of 1