For many years I battled against a source of local light pollution - security lighting associated with Old Peoples bungalows. A delicate problem because the old folk lived alone vulnerable to vandals & even worse criminals. Unfortunately the only solution seemed - throw more light at it. I was fairly lucky - the manageress who at that time lived on the site was sympathetic about my concerns & allowed me to adjust the direction of the worst offending lighting. I coped best I could until 5 years ago when I needed to give up night sky stargazing.
Subsequently I had thought (Ah! Ah!) that because of supposedly more environmental concerns generally light pollution might gradually get more limited. However it seems the Old Folks problems have got no better & cut backs to police funding may not have helped. The only answer seems throw ever more light at it !
I attach an image to illustrate what I mean. I feel almost pleased I no longer stargaze at night.
from Cliff 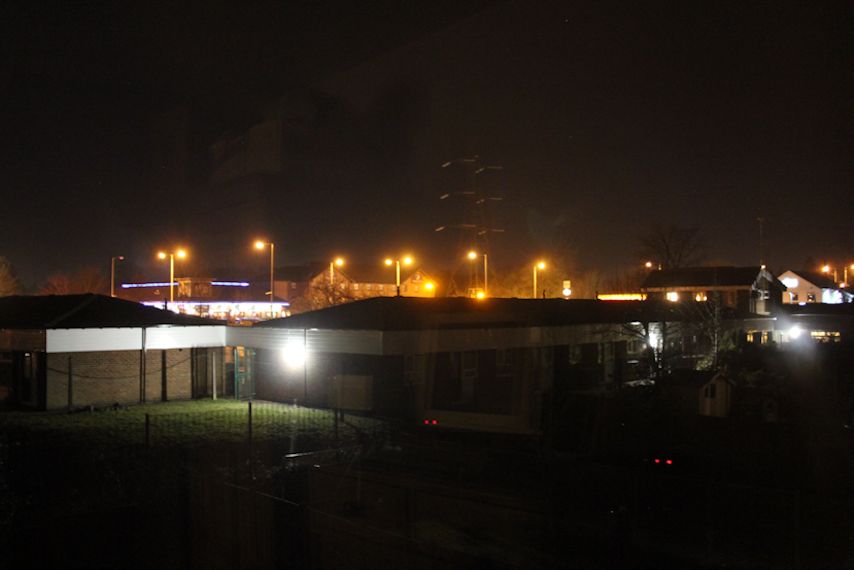 Cliff, I can see what you mean. It does get worse not better. Our adjoining neighbours have had an extension built and a new light fixed on the corner of it. It's bright and white and lights up my garden like a full Moon over snow now. They are a nice couple who were broken into Christmas before last and, understandably, ever since they have been concerned about security at the back of their house - particularly as they work different shifts. These are factors that drive people to install more and more glary lighting. I was out last night trying to chase down some variables and had to give up on ones below 7th mag even with an 80mm refractor; and my pupils would not dilate to the 4mm or so demanded by the x18 eyepiece! In the end clouds came in so that was that. At least the light goes off after about 9.30.
Oh, sorry about the Oz flu. I must have breathed over your place as we came in to land at Manchester three weeks back. Hope you are over the worst.
Bob
Top

Bob (note my informal start meant to be friendly not curt !)
Thanks for your comments. I'm pleased you seemed to enjoy your trip to southern regions & even included doing some practical astronomy. And got home safely !
Since I stopped night sky star gazing I've tended to ignore light pollution (being a problem no longer affecting me personally. However, this "new" lighting scourge hit a nerve.
Yes, I feel quite upset by about the problems our Old Folk bungalow residents "still" experience from vandals and even more serious criminals. However, I am not convinced the "improved" security lighting is the only best answer. BUT it does suggest to me that light pollution is of no concern to the majority of humans.
Best wishes from Cliff
Top

CIiff, It sets you thinking. Far from being apathetic, maybe our contemporary, boozy and anxious populations are innately fearful of the night sky.
In ancient times humanity was blessed with a pristine view of the dark sky and was respectful of its supposed portents. They linked disasters with the appearance of transients, such as bright meteors. They awaited renewals, such as the annual floods of great rivers, to occur with the rising of stars and constellations. But that deep, dark view didn’t give our ancestors peace of mind; they were superstitious and fearful.
Maybe there remains in us a subconscious urge to blot it out. Look at all the nonsense on the web even today about the ninth planet and disaster from asteroids etc. Maybe we really want to drown the old stars.
And we have just about succeeded. Some constellations are now invisible from where most people live. Prime examples are Capricornus and Aquarius. Try finding their stars with the unaided eye from modern well-lit urban locations. But perhaps the old superstition remains deep within us and emerges again when we frequent dark locations.

Bob
Thanks again.
Over the years I think I've known a few, though not many poets, but NO sonneteers.
So you are a first.
Arguably, art as a whole is an immense field. I like to think I have at least a little genuine interest in art, though limited - music & painting (not decorating!).
One of my favourite bits of music is Holst's "Planet Suite". Though perhaps that's more astrology related than astronomy. However, I can relate it to stargazing - especially Mars of course.
Art; I once visited the Louvre in Paris. Seeing the Mona Lisa was a big disappointment - BIG FLOP. The Louvre painting I really liked was a picture of Napoleon leading his bedraggled army retreating from Russia. As it happened my Grandad (a window cleaner who liked history) talked a lot about Napoleon - indeed so much when I was a youngster I told my primary school teacher that my Grandad actually knew Napoleon.
However years later after visiting the Louvre, I learned the probable reality. After defeat in Russia, Napoleon quickly disappeared and rushed back to France as fast as he could (by stagecoach). Meanwhile the rabble of his battered troops struggled back through Europe. I gather previously when advancing the French did not always treat the locals in the countries they advanced through very well. So when retreating the battered French did not have a very easy time (?).
So I subsequently got mixed feelings about Art. And with respect to astronomy I don't like Van Gogh's "Starry Night".
My own art (apart from blowing a mouth organ) is restricted to painting (confined to watercolour). I never produced any satisfactory astronomically related watercolours. Although for many years I did enjoyed pencil sketching at the eyepiece which was very important to me (although even when I started "serious" observing my eyesight was probably passed its best) and eventually I felt happier CCD imaging.
I must admit even some quite well known amateur astronomers "drawings" I sometimes thought revealed hints of style that I thought detracted a bit from scientific reality (?).
Perhaps to sum up my thoughts about art: I personally do not like "the Angel of the North".
But when its called " the Gateshead Flasher" it really comes to life.
Best wishes from Cliff
Top

Holst's "The Planets" is a magnificent introduction to classical music Cliff. My favourites are Venus and Jupiter.
Not only does Holst exemplify the Olympians, but he captures the character of each of the actual planets. I never tire of listening to "The Planets".
The Mona Lisa you saw in Paris might be an original Tom Keating