The place to discuss telescopes, binoculars, CCDs and other equipment

Just seen a Maginon spotter on the oddments table at ALDI for £19.99. Seems a good buy, that and the Mary Poppins play outfit. Anyone tried one out?
Bob
amended title - this is a x20 to x60 zoom 60mm scope
Top

These Aldi spotters have been around for quite a long time.
O.K. for the money if one tries a few and buys the best one.

The Mary Poppins outfit didn't fit so I had to return it.

I had an Aldi spotter some years ago and gave it to my son. The body is made from black polycarbonate, which makes them cheap to produce. As has been said, okay for the price, but it’s better to get the best spotter we can afford. Later, I bought a second Aldi spotter, but it wasn’t as good as the first one.
Last edited by brian livesey on Tue May 24, 2022 9:03 pm, edited 2 times in total.
brian
Top

So you kept the Mary Poppins outfit then, Brian? Bob
Top

At 20x60 may just be usable [ but difficult to test in a supermarket ] but at 60x60 must be horrible trying to view through such a tiny exit pupil, apart from any other certain optical problems! regards mike f.
Top

In 2012 I bought an Optus 20-60x60 spotting scope from Aldi for £25 which was usable at the lowest magnification and used it astronomically between July and October of that year. However soon modified it by, I think, replacing the eyepiece, as for most of that period it is entered in my diary as 'modified Optus'. Eventually scrapped it. Still at that price was some use. regards mike f.
Top

IWhether it was the Optus objective, prisms, or zoom at fault dunno.
Last edited by brian livesey on Tue May 24, 2022 9:09 pm, edited 1 time in total.
brian
Top

Yesterday I acquired a 20-60x60 National Geographic spotter in one of the Cash Converter shops, at a cheapish price, mainly for something to 'toy with' during lack of observing opportunities, with too much cloud and limited clear sky. It was, as I expected hopeless when zoomed up beyond x20.
I thought to return it or dump it, thinking that I should have known better than to have bought it in the first place but decided to try to remove the zoom eyepiece which is often the cause of such problems.
Above, I mentioned the Optus with a similar problem and solving it by replacing the zoom eyepiece with a standard non-zoom. It took a bit of 'brute force and ignorance' to remove the zoom and dumped it. Attempted to fit the basic eyepiece only to find that it was slightly too large, and if just located in the short recess was too long to access focus. Removed the shiny metal sleeve from the eyepiece, it now focused when in the recess. A bit of black 'electrician's tape' wrapped around the eyepiece and lip of the recess should hold it firmly, if not neatly, in place. The image is now bright, sharp, clear and, of course still the right-way-up as the prisms still remain and focussing is still by the usual knob. The magnification is now about x14. That is about double that of 7x50 binocular which was used for comparison and re: checked by projection an image of a distant view using the OG alone, onto a wall = about 14" fl and divided by the fl of the eyepiece = x14
As it can be mounted on a light tripod and is in itself light in weight it should be handy to carry to the Park to observe the morning planets... And toying with it kept me busy for a couple of hours or so... Must now find it buy a roll of tape! Regards mike f.
Top 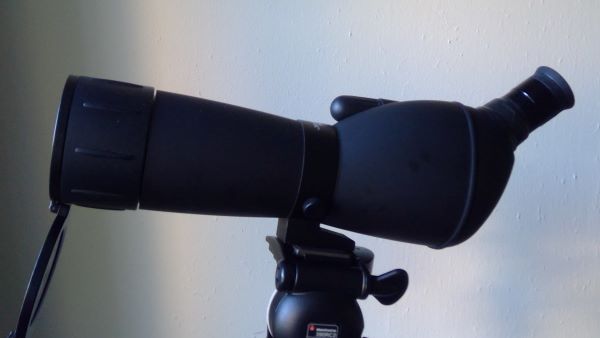 Whereas you suspected the zoom eyepiece was poor Mike, I suspected that it might be that the objective was at fault, so I dumped it and kept the zoom. In fact, I was using it on the modded PST the other day. Despite a little mould in the zoom, I had a good view of a prominence at the centre of the field-of-view.
brian
Top
Post Reply
10 posts • Page 1 of 1

Return to “Telescopes and instruments”